The House on Maple Street 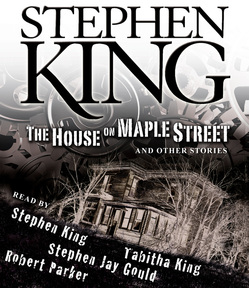 The story begins when little Melissa noticed something in the walls of the house. She runs off to consult to her older brother, Brian, who in turn tells his elder sister, Lauren, who finally goes around to tell the eldest, Trent. Together, the children inspect the walls and finds a strange alloy hidden among the plaster. Curious, the children start to search the house for more signs of this alloy and to their surprise and alarm, it appears that the metal is starting to take over the house -- and it continues to grow. Trent later discovers a countdown clock in his father's old wine cabinet and it was slowly ticking its way down to zero.

During this time, the children were dodging their stepfather, Lewis Evans, who reigns the family with an iron fist. Lewis decided to host a faculty party at his house, disregarding the fact that his wife was suffering from mind-numbing migraines. When Catherine Bradbury kneels over in the middle of the party, the children rush to her side to assist her while Lewis scolds them for disobeying his orders. After the party, he scolds his wife for fainting and embarrassing him before his colleagues. At this point, Trent and Lauren hatched a plan to teach their stepfather a lesson. A day afterwards, the two oldest Bradbury children skip school and trick their mother into leaving the house. Shortly afterwards, they call Lewis back home, telling them that their mother fainted in his study.

Angered at the fact that his wife entered the study without his permission, Lewis rushed home and Trent locked the door behind hm. The house starts the shake and Trent noticed that the count down has almost reached zero. The children rush out of the house just in time as it lifts off and blasts off into the sky. 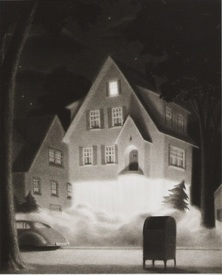 ﻿As it says on  the tin, "House on Maple Street" takes place in the Bradbury/Evans house on Maple Street in the United Kingdom. The house belonged to the Bradbury's before Catherine remarried and it contains memories of Catherine's late husband and the children's father, Bill Bradbury. Also, there are a few other minor settings that don't contribute to the story like: the school and the university.﻿

The Bradbury Children
Trent:
The eldest of the Bradbury bunch is Trent, a responsible and brotherly fourteen year old. He is Lauren's closest confident and the one who takes action against Lewis. Trent is often looked up to by his siblings and fulfills the fatherly figure role that is missing from his younger siblings' lives.  It is mentioned that Trent is the carbon copy of his father, Bill Bradbury.
Lauren:
The second child, younger to Trent by three years. She looks up to Trent and sees him as the go-to-guy whenever she is troubled by something. Trent likes to affectionately call her Sprat. Lauren is very perspective towards the situation in the family and often worries about the relationship between her mother and her stepfather.
Brian:
Unlike his two elder siblings, Brian has never met his birth father and grew up under the oppressive rule of Lewis Evans. He is not completely aware of the situation between the family as a seven year old, but he is very wary of "Daddy Lew."
Melissa:
At the age of five, Melissa is the youngest of the Bradbury children. She is the one with the sharpest eyes and the very first one to notice that something strange as happening to the house.

The Grownups
Lewis Evans:
The oppressive and authoritative stepfather who took control of the Bradbury family. He works at a university in the Historical Department and spends a great deal of his time in the office. Lewis is very demanding and often insensitive to his family. His office is completely off-limits to the rest of his family and he disciplines the children harshly if they trespass into the space or undermines his authority. All of the Bradbury children regard him with a lot of fear and often avoids being in his presence. It is implied that he is also one of the sources for his wife's migraines and fatigue.
Catherine Evans (Née Bradbury):
The mother of the Bradbury children who married to Lewis. She sufferers from fatigue and has chronic migraines which causes her to faint on occasions.
Bill Bradbury:
The father of the Bradbury Bunch who mysteriously died before the beginning of the story. Bill is mentioned to be a good father and cared deeply for his wife. He was mentioned to have a wine cellar and a workshop down in the basement.